Nobel laureate Elizabeth Blackburn, PhD, professor of biochemistry and biophysics at UC San Francisco, has been named the first woman president of the Salk Institute for Biological Sciences.

Based in La Jolla, the Salk Institute is one of the world’s leading scientific enterprises, with investigators pursuing research in such areas as cancer, neuroscience, aging and plant biology. Blackburn, who has been a non-resident fellow of the institute since 2001, will assume her new position on Jan. 1, 2016.

“A wonderful colleague, collaborator, mentor and friend to many, Liz has exemplified the values of UCSF, including inquisitiveness, collaboration – reaching out to basic researchers and clinical researchers in different disciplines across our university and beyond,” UCSF Chancellor Sam Hawgood, MBBS, said in a message sharing the news with the UCSF community.

"A role model for many, she has fostered the training and careers of countless students and postdoctoral scholars,” he added.

Blackburn joined the faculty at UCSF in 1990 and served as chair of the microbiology and immunology department from 1993-99. Currently the Morris Herzstein Professor of Biology and Physiology at UCSF, her research has focused on the functions of telomeres, the protective caps at the ends of chromosomes. 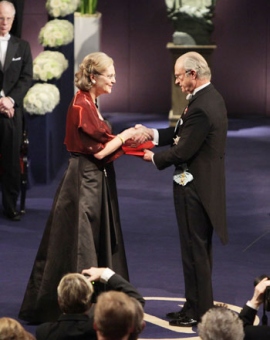 Elizabeth Blackburn receiving her 2009 Nobel Prize in Physiology or Medicine in a Stockholm ceremony. Photo by Frida Westholm/Nobel Foundation

She won the Nobel Prize in Physiology or Medicine in 2009for discovering the molecular nature of telomeres and for co-discovering telomerase, an enzyme that maintains telomere ends. Both telomeres and telomerase are thought to play central roles in aging and diseases such as cancer, and her work helped launch entire new fields of research in these areas.

The discoveries led to efforts to target telomerase to treat age-related diseases such as blindness, cardiovascular disease and neurodegenerative diseases, as well as cancer. In recent years, research by Blackburn and others has also shown the impact of psychological stress and lifestyle factors on telomere length.

In addition to the Nobel, Blackburn has received nearly every other major scientific award during her tenure at UCSF, including the Lasker, Gruber and Gairdner prizes. She was named to the TIME 100 in 2007, the magazine’s yearly list of the most influential people in the world. She is a member of numerous prestigious scientific societies, including the National Academy of Sciences, the National Academy of Medicine and the Royal Society of London.