Targeting a Key Driver of Cancer 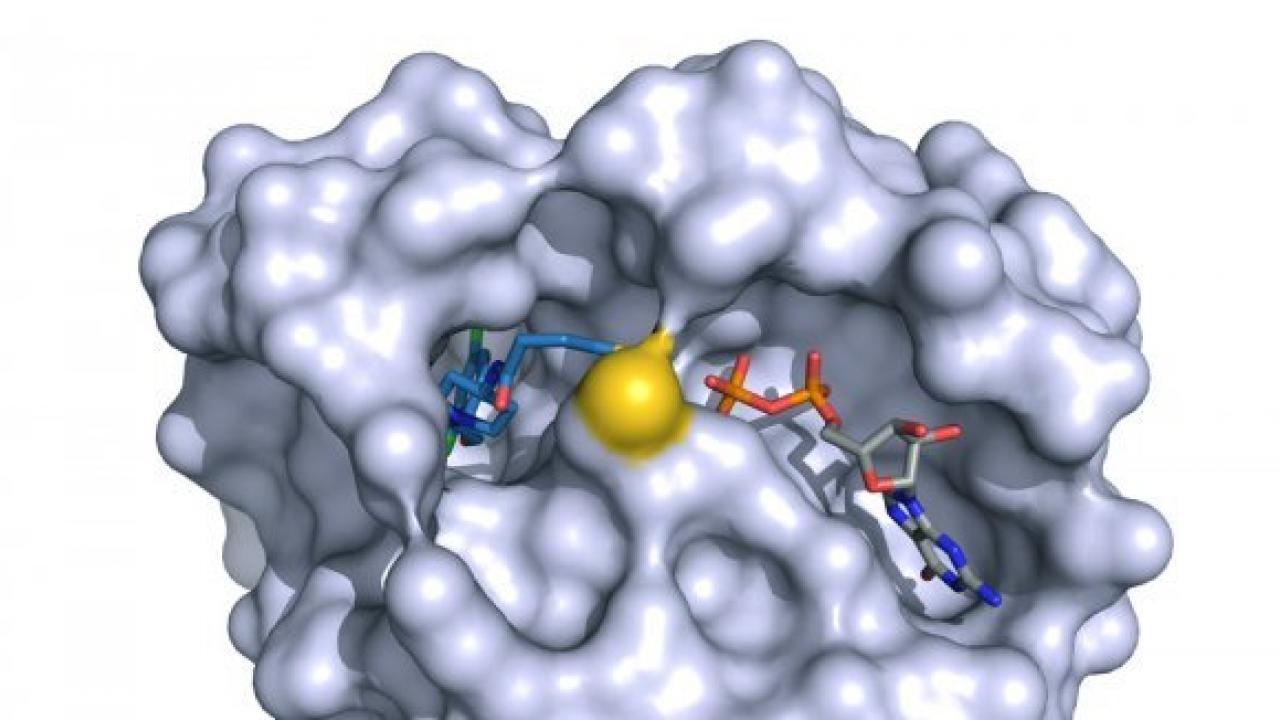 In a recent breakthrough, a team led by UCSF's Kevan Shokat was able to exploit a previously unknown "Achilles heel" in K-Ras, part of a family of protein mutations that's responsible for many cancers. The team discovered a binding site, or "pocket," where they could design a chemical compound (shown in color) to attach to K-Ras and inhibit its activity. Image courtesy of Shokat Lab

It’s one of the most common and deadly drivers of cancer, yet it has eluded any drug therapies for decades.

Now, buoyed by recent research breakthroughs and funding support, scientists are pushing harder than ever to target what has been called "undruggable."

In the epic fight against cancer, a protein called Ras has been one of the arch-villains.
First identified in human cancers in the 1980s, this protein is responsible for roughly one-third of all cases, as well as some of the deadliest, including lung, colon and pancreatic cancers.
Ras is a key switch in a multi-step cascade of molecular interactions that take place within cells. Mutations in Ras proteins can result in excessive signals for cells to proliferate and cause them to ignore cues for programmed cell death, leading to unchecked growth and tumor formation.
The key to curing many cancers could be to disrupt this cell signaling and dependence on Ras.
Decades of research have proven unsuccessful in developing a drug that can target the mutant Ras proteins found in cancer, yet the potential remains huge – so huge that the National Cancer Institute (NCI) last year announced a $10 million effort, dubbed the RAS Program, aimed at developing new ideas for targeting the protein. Frank McCormick, PhD, FRS, a leader in Ras research, recently stepped down as director of the UCSF Helen Diller Comprehensive Cancer Center to lead the new NCI project.

Harold Varmus, MD, head of the National Cancer Institute who won the 1989 Nobel Prize for his cancer research at UCSF, and Frank McCormick, PhD, FRS, discuss why the RAS Program was formed.

“A lot of people got into the drug discovery for Ras very early on and failed,” McCormick explained. “The clinical need [for a Ras drug] is the same or perhaps even better recognized than it was 30 years ago, but technology has advanced to the point where it's worth having another shot at it.”
McCormick and other experts around the world will share their knowledge this week at a two-day symposium hosted by UC San Francisco called "Targeting RAS Now for Future Cancer Therapy."
Read more on RAS on the latest in UCSF.edu: "Targeting an ‘Undruggable’ Protein", "A Multipronged Attack on Ras", "The Future of Ras-Targeted Therapy"
Read more at UCSF.edu