Protein May Be Key to Cancer's Deadly Resurgences 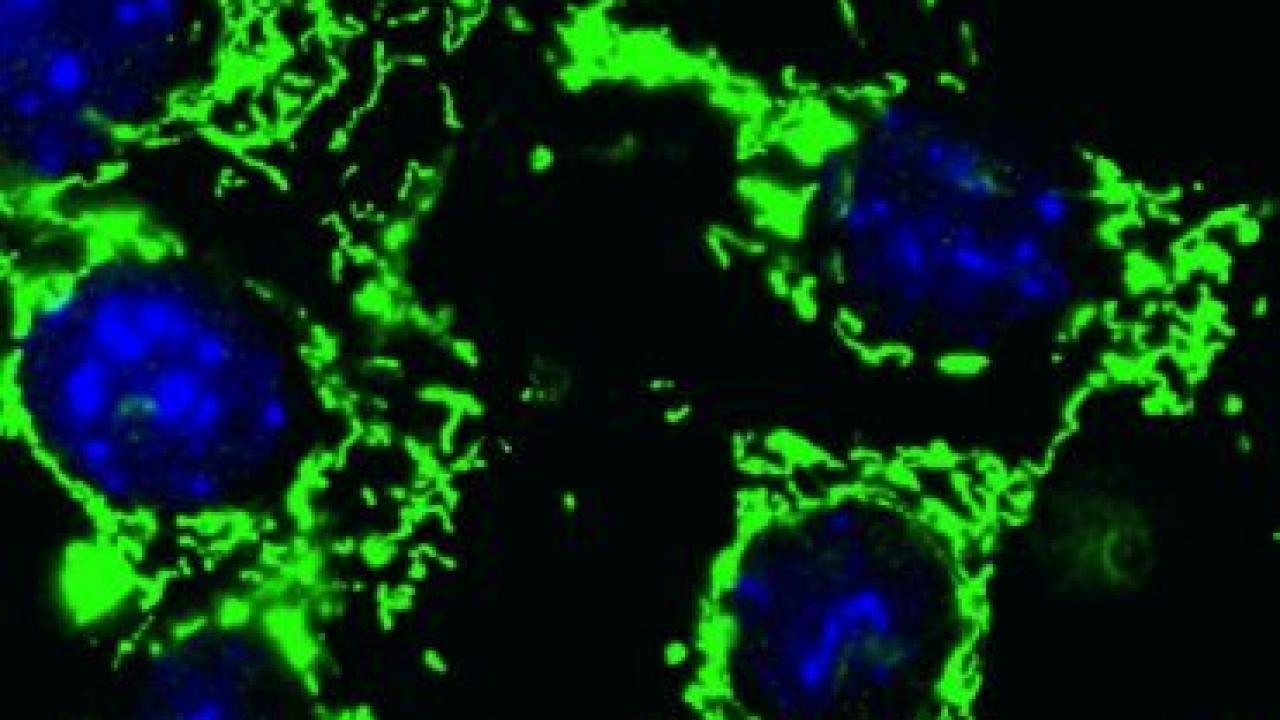 The green indicates the key protein HIGD1A that slows down the metabolism of cancer cells, allowing them to hibernate and survive longterm. These mouse embryonic cells have been programmed to overexpress the protein. Image courtesty of the Maltepe Lab.

Tumor recurrence following a period of remission is the main cause of death in cancer. The ability of cancer cells to remain dormant during and following therapy, only to be reactivated at a later time, frequently with greater aggressiveness, is one of the least-understood aspects of the disease.
UCSF researchers working in the laboratory of Emin Maltepe, MD, PhD, associate professor of pediatrics, led by associate research specialist Kurosh Ameri, PhD, have now identified a protein that plays a critical role in this process.
Tackling Resistant Cancer Cells
Solid tumors have a core composed of necrotic, or dying, cells. Ameri and colleagues concentrated on the part of tumors that immediately surrounds these necrotic cores, which is known as the perinecrotic region.
Cancer cells in the perinecrotic region have traditionally been more difficult to eradicate than those nearer to the tumor surface, because they are deprived of both oxygen and nutrients – factors that promote resistance to therapy.
A classic regulator of cellular responses to low-oxygen conditions is the transcription factor known as hypoxia-inducible factor 1, or HIF-1. Perinecrotic regions paradoxically lack HIF-1 activity, but they retain expression of a small subset of HIF target genes.
The authors of the new study found that the protein product of one of these genes, a mitochondrial protein called HIGD1A, enables cells to survive in the extreme environment deep in the tumor by repressing their metabolism and the production of toxic reactive oxygen species (ROS).
Key Protein Represses Tumor Growth
When the scientists engineered tumors to overexpress HIGD1A, the tumors dramatically repressed their growth, as the team reported in the Feb. 17 issue of Cell Reports. But the overall survival of the tumor cells was significantly enhanced, and these effects were even seen in mice that lacked the HIF-1 protein.
To discern the mechanisms behind these effects, the authors looked for interactions between HIGD1A and other mitochondrial proteins. They found that it interacted with components of the electron transport chain responsible for oxygen consumption as well as ROS production. Expression of the HIGD1A protein reduced oxygen consumption but triggered increased mitochondrial ROS formation, which resulted in the activation of cellular antioxidant mechanisms driven by another critical metabolic regulatory protein, AMP-dependent kinase, or AMPK.
Surprisingly, the researchers found that the HIGD1A gene is not activated by hypoxia, or oxygen deprivation, in human cancers, even though the gene recruits HIF-1 to its promoter region. A lack of HIGD1A expression in response to hypoxia alone was due to increased methylation of the HIGD1A gene’s regulatory regions, which could be overcome in experiments either by applying pharmacological DNA-demethylating agents, or by combined oxygen/glucose deprivation, conditions that simulate the perinecrotic environment.
These data suggest that HIGD1A plays an important role in tumor dormancy mechanisms and may be a novel target for cancer therapy.
Read more at UCSF.edu