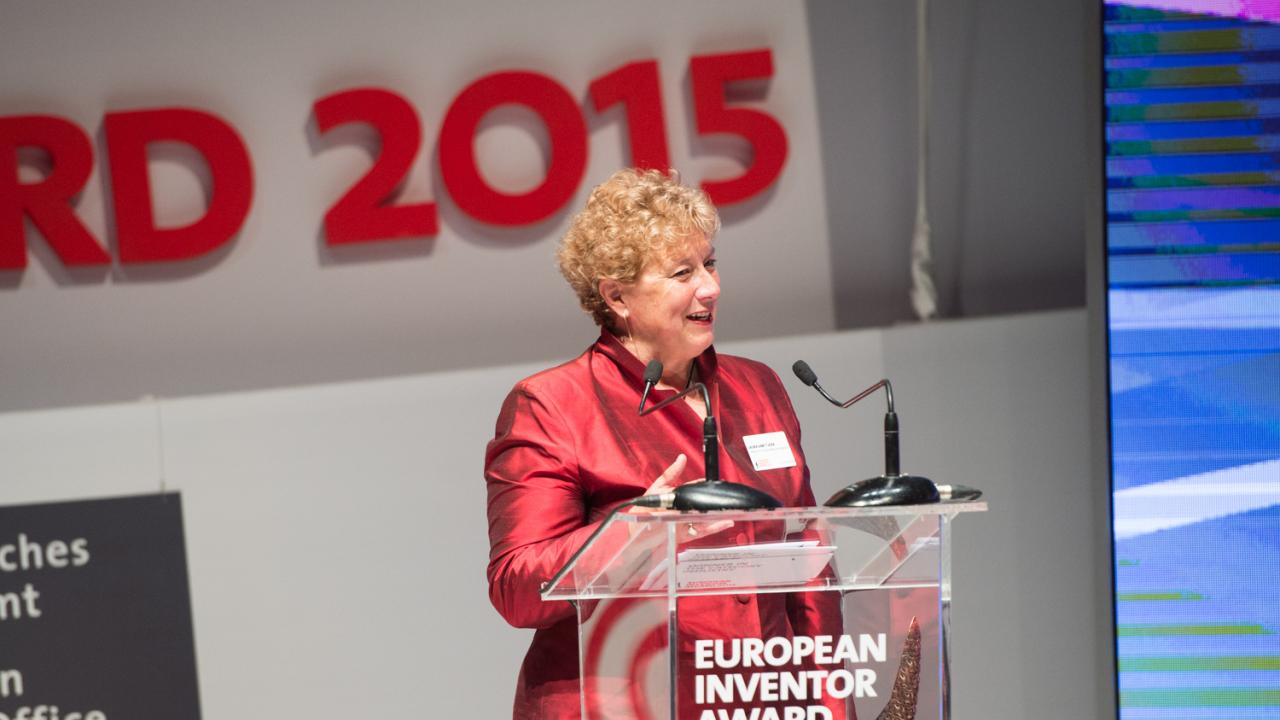 Laura Van 't Veer, PhD (Netherlands), co-leader of the HDFCCC Breast Oncology Program, was awarded the prize for the invention of a gene-based tissue test which makes it possible to offer targeted treatment for breast cancer. It provides women in the early stage of breast cancer with a reliable prognosis as to whether chemotherapy is actually necessary. The technology has already helped over 40,000 women with treatment for cancer, resulting in 20 to 30 percent fewer women having to undergo lengthy chemotherapy.

Speaking at the ceremony, she thanked her team and described the satisfaction of turning “research findings into real products for patients”. She said: “I appreciate being able to provide something that provides the most optimal treatment.”

She was awarded the Small and medium-sized enterprises (SMEs) prize.  Read the full press release below:

Paris/Munich, 11 June 2015 – Breast cancer is the most common form of cancer among women. In 2012 alone, more than 1.7 million women worldwide were diagnosed with the life- threatening illness. Even when doctors are able to successfully remove a tumour, in most cases follow-up chemotherapy treatment is prescribed in order to reduce the risk of recurrence. But till now many women received the treatment unnecessarily, because not all of them are actually at risk for recurrence.

Thanks to the invention of Laura van ’t Veer, this sort of generalised prognosis is now a thing of the past. The Dutch scientist developed a gene-based tissue test that can give women in the early stages of breast cancer a clear and reliable prognosis of whether or not chemotherapy is actually necessary for their recovery. Patients who have a lower risk of recurrence are able to recover and stay tumour-free without chemotherapy.

With this test, the 58-year-old inventor has marked a true milestone in the treatment of breast cancer. For her outstanding achievement, the European Patent Office (EPO) honoured Laura van ’t Veer with the European Inventor Award in the “Small and Medium-sized Enterprises (SMEs)” category today in Paris. The prestigious award, now in its 10th year, is presented annually by the EPO to recognise outstanding inventors who have made an exceptional contribution to social development, technological progress and economic growth.

“Van ’t Veer’s development has revolutionised cancer diagnostics by making it possible for treatments to be tailored to the individual needs of each patient. This makes her one of the most outstanding European inventors in the area of individualised medicine,” said EPO President Benoît Battistelli today at the award ceremony, held at the Palais Brongniart, the historical Paris stock exchange, in the presence of more than 400 guests from the worlds of politics, economics and science.

Enabling a look inside the genes

When in 2001, the biologist and her team at the Netherlands Cancer Institute discovered that a specific DNA signature made up of 70 genes is what determines the risk factor for the recurrence of breast cancer in women, they used the findings to make a breakthrough in medicine. Before this, doctors relied solely on the pathological findings, age of the patient and number of divided cancer cells when deciding upon treatment. “We discovered that we could identify a gene activity pattern in the tumours that would allow us to distinguish high risk cases from low risk ones,” van ’t Veer says looking back. It was based on these findings that she came up with the ground-breaking test together with her team. The test measures the activity of tumour-specific DNA with the help of a microchip. Using just a small tissue sample from the patient, the test can deliver results within 10 days and determine if the patient is at high risk or not. “You can compare the activity of genes that are either switched on or off. If the gene is switched on, the tumour is very aggressive. It invades the surrounding tissue, travels through the body and can give rise to metastases in another organ. If those 70 genes are switched off, then the tumour will remain in its place and there is not much risk of a reoccurrence,” she explains.

Remarkable economic value thanks to patent

After patenting her invention in 2001, Laura van ’t Veer founded a start-up called Agendia with her research partner René Bernards. Today, with locations in Amsterdam and California, the company is a global leader in the field of molecular diagnostics. In 2004 they brought the test onto the market under the name MammaPrint and to date the technology has empowered over 40 000 women in more than 30 countries with the information needed to choose the right course of treatment for their breast cancer. “Using the MammaPrint in clinical practice allows us to reduce the number of women who have to go through chemotherapy by 20-30 percent,” says van ’t Veer. “A patient who is not likely to suffer from a reoccurrence of cancer, would only suffer needlessly from chemo’s side effects, which can include loss of hair and extreme lethargy.”

With over 230 scientific publications and a vast collection of awards for her achievements in breast cancer research, van ‘t Veer is one of the best-known experts in the field. Today she serves as Chief Research Officer at Agendia where she continues to research and further develop cancer treatment with her team in Amsterdam. Since 2010, the Dutch scientist has had her home base in San Francisco where she also works as a professor for Laboratory Medicine at the University of California.