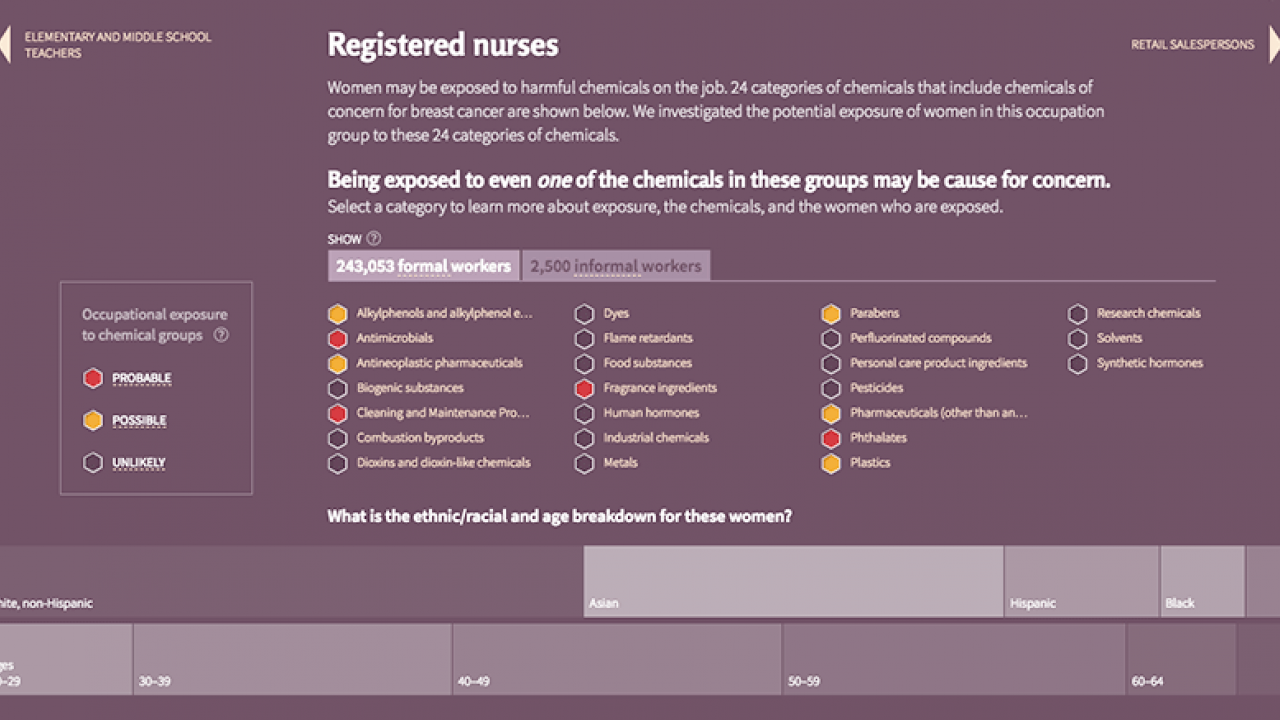 A new web tool spells out for the first time the exposures that more than 6.5 million working women in California face that could increase their risk for breast cancer, including industrial solvents, antimicrobials and phthalates.

The tool, which was developed by researchers at UC San Francisco and the California Department of Public Health’s Occupational Health Branch, is part of an ongoing study focused on understanding potential breast cancer risks related to workplace chemical exposures.

Users can search the database by ethnicity/race, age, and occupation to see risk information on more than a thousand chemicals, sorted into 24 chemical groups, as well as which chemicals are likely to be present in various occupations. The tool can be found here.

“This is the first time that data of this magnitude have been made visible in one place,” said Robert Harrison, MD, MPH, co-principal investigator on the website project and founder of UCSF Occupational Health Services. He has diagnosed and treated more than 10,000 patients with work- and environmental-induced diseases and injuries. He also directs the worker tracking investigation program for the California Department of Public Health.

“With the site, researchers and advocates can see which chemical exposures may be putting working women in particular jobs at risk for breast cancer,” Harrison said.

Site visitors also can see why certain chemical groups may be of concern for breast cancer, and find information on the likelihood that women in certain occupations, such as cashiers, housekeepers and nurses, are facing increased risk from workplace exposures.

While only a fraction of the estimated 80,000 chemicals used in workplaces have been tested to see if they cause cancer, at least 200 have been shown to cause mammary tumors in animals.

The interactive tool also enables viewers to map out what women’s employment looks like in California, and what chemical exposures are likely to occur in the jobs where substantial numbers of women work. The tool shows known and suspected mammary gland carcinogens, mammary gland toxicants, and endocrine disrupting chemicals.

“There are currently gaps in our understanding about the risks of cancer faced by working women, particularly women of color,” said Peggy Reynolds, PhD, MPH, co-principal investigator and epidemiologist at UCSF. Her research focuses on environmental risk factors for cancer.