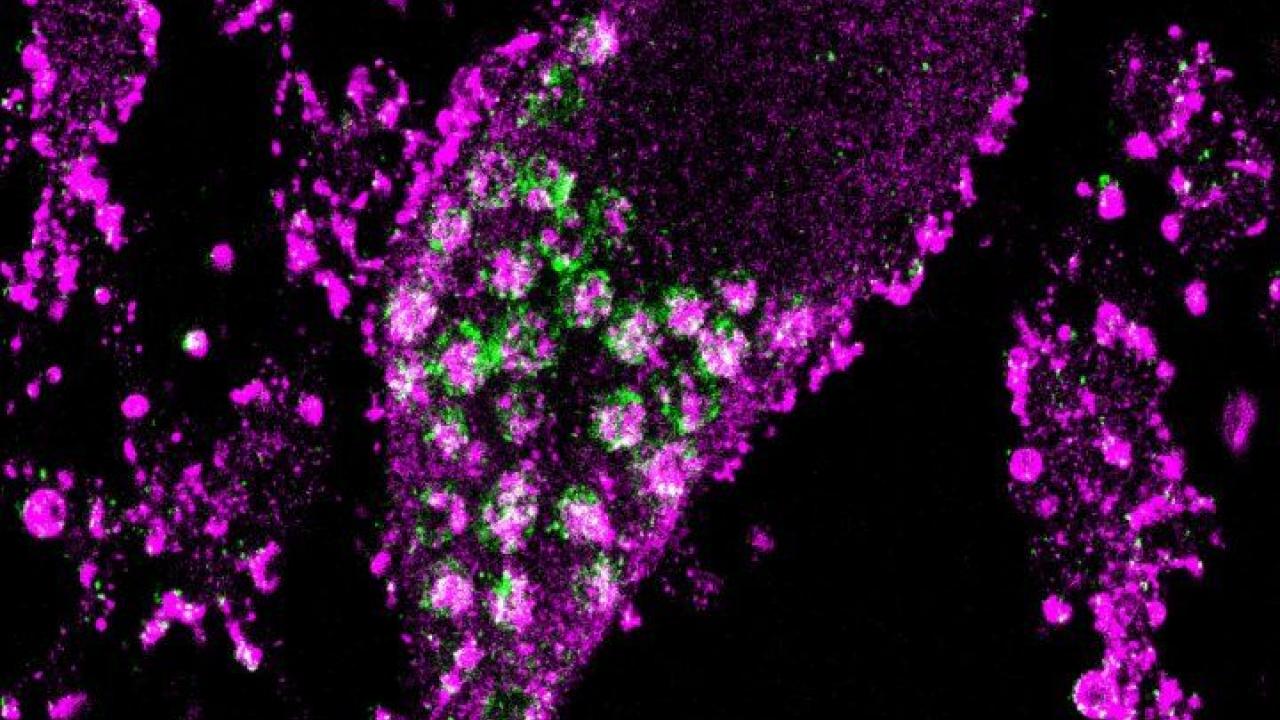 Super-resolution microscopy of a neuron shows the accumulation of lipids within lysosomes that occurs when the gene for prosaposin is suppressed. Image credit: Kampmann Lab

When a single gene in a cell is turned on or off, its resulting presence or absence can affect the function and survival of the cell. In a new study appearing May 24 in Nature Neuroscience, UCSF researchers have successfully catalogued this effect in the human neuron by separately toggling each of the 20,000 genes in the human genome.

In doing so, they’ve created a technique that can be employed for many different cell types, as well as a database where other researchers using the new technique can contribute similar knowledge, creating a picture of gene function in disease across the entire spectrum of human cells.

“This is the key next step in uncovering the mechanisms behind disease genes,” said Martin Kampmann, PhD, associate professor, Institute for Neurodegenerative Diseases and the UCSF Weill Institute for Neurosciences, noting that the work leverages recent advances in gene sequencing, stem cell technology and CRISPR.

“There are lots of human genetics studies linking specific genes to specific diseases,” Kampmann said. “The work we’re doing can provide insight into how changes in these genes lead to disease and allow us to target them with treatments.”

His team was interested in pinpointing genes that might be involved in neurodegenerative diseases such as Alzheimer’s and related forms of dementia. Their approach included using stem-cell-generated human neurons and identifying chemical changes that occur in the cell when individual genes are turned on and off.

They were looking specifically for downstream changes in gene expression that would produce oxidative stress in the cell, a circumstance in which highly reactive forms of oxygen can create a toxic environment. Such conditions are thought to contribute to neurodegeneration.

To survey individual genes and learn more about their functions, Kampmann employed a technique called CRISPR activation/interference, or CRISPRa/i, which he co-developed as a UCSF post-doctoral scholar working on cancer cells with Jonathan Weissman, PhD, a former UCSF faculty member and current Whitehead Institute member and investigator with the Howard Hughes Medical Institute. CRISPRa/i allows a researcher to temporarily turn a single gene off or on and see how that change affects the expression of other genes.