Scientific seminars are a staple of research at UCSF, providing a forum for engaging with researchers from around the world.

The Friday Seminar series at the UCSF Helen Diller Family Comprehensive Cancer Center (HDFCCC), now in its third decade, continues to drive dialogue and innovation by featuring leading cancer researchers at UCSF and beyond.

As the new academic year begins, we look back at the history of the series and some of the noteworthy internal and external speakers who have presented since the Cancer Center achieved Comprehensive status in 1999.

A Cornerstone of Research

Since the early days of the HDFCCC, weekly scientific seminars have been a cornerstone of cancer research activities. Cancer research seminars were held weekly at both Parnassus and Mount Zion and, as mentioned in the 1999 Cancer Center Support Grant, aimed "to reach the primary audience of faculty, postdocs, and graduate student researchers." 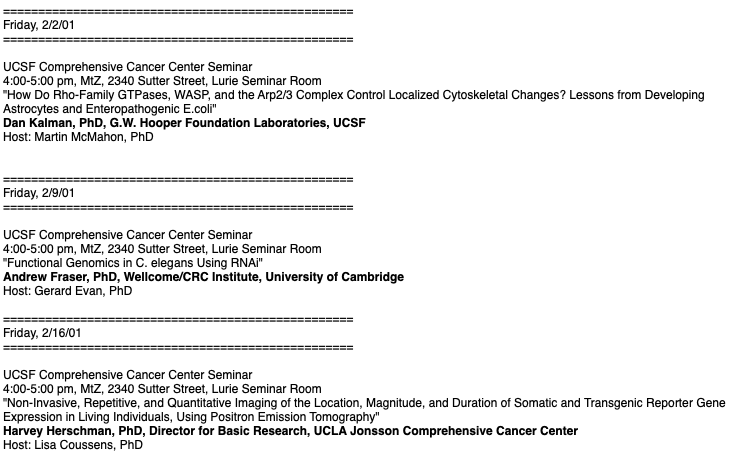 A sample of the cancer research presented at the UCSF Friday Seminar Series in 2001 as advertised in a weekly email announcement.

Friday Seminars have continued through each academic year since, highlighting scientific expertise from a wealth of national and internationally recognized scholars including many from UCSF.

The Lurie Seminar Room at the UCSF Cancer Research Building at Mount Zion.

With the opening of the Cancer Research Building at 2340 Sutter Street in 2000, the Lurie Seminar Room on the first floor became the primary location of the Friday Seminars. Presentations were occasionally videotaped but mostly the weekly events were limited to in-person attendance and were promoted primarily through internal emails and posted flyers.

As the center expanded to Mission Bay in 2009, the opening of the Helen Diller Family Cancer Research Building with the first floor Bakar Auditorium allowed for increased in-person capacity as well as class capture to stream the seminars. The arrival of digital signage across UCSF campuses and the broad use of social media amplified the promotion and reach of the series to a wider audience.

Over the decades, the series has hosted luminaries in all areas of cancer research such as Chi Van Dang, MD, PhD, Scientific Director of the Ludwig Institute for Cancer Research (2010), Jennifer Doudna, PhD, Nobel Laureate and senior investigator at Gladstone Institute of Data Science and Biotechnology (2012), Helen Piwnica-Worms, PhD, Vice Provost of Science and Professor of Experimental Radiation Oncology at MD Anderson (2014), and Lewis Cantley, PhD, Meyer Director of the Sandra and Edward Meyer Cancer Center at Weill Cornell Medical College (2020). The consistent quality of the speaker lineup has resulted in high attendance in person and online.

UCSF Expertise Past and Present on Display

Many notable former HDFCCC program leaders have returned as Friday Seminar speakers. Joe Gray, PhD, currently the Associate Director for Biophysical Oncology at the OHSU Knight Cancer Institute, School of Medicine, and former co-leader of the HDFCCC Breast Oncology Program returned to present in 2014. Martin McMahon, PhD of the Huntsman Cancer Institute, who co-led the HDFCCC Experimental Therapeutics Program, presented at UCSF in 2019. Gerard Evan, PhD, FRS, currently at Cambridge University and former co-leader of the HDFCCC Cell Cycling and Signaling Program, delivered a virtual seminar in March of 2021.

Several current HDFCCC members presented at the series prior to their UCSF appointments. Alejandro Sweet-Cordero, MD, presented in 2007 while on faculty at Stanford. He returned to UCSF in 2016 to lead the Molecular Oncology Initiative.

Like many seminars, the pandemic switch to Zoom has allowed for a dramatic increase in the number of viewers, while streamlining and diversifying potential speakers since travel is no longer a prerequisite for participation. In the 2020-2021 series, the first year the seminar was virtual, the lineup included speakers from Australia, France, Spain, Italy, and Canada.

The Seminar series is effectively a microcosm of the expertise of UCSF cancer researchers as an impressive list of internal speakers balance the schedule each year. From postdoctoral candidates to Cancer Center leadership such as current president Alan Ashworth, PhD, FRS (2015) and previous director Frank McCormick, PhD, FRS (2018), seminar speakers bring a wealth of expertise which benefits the UCSF cancer research community.