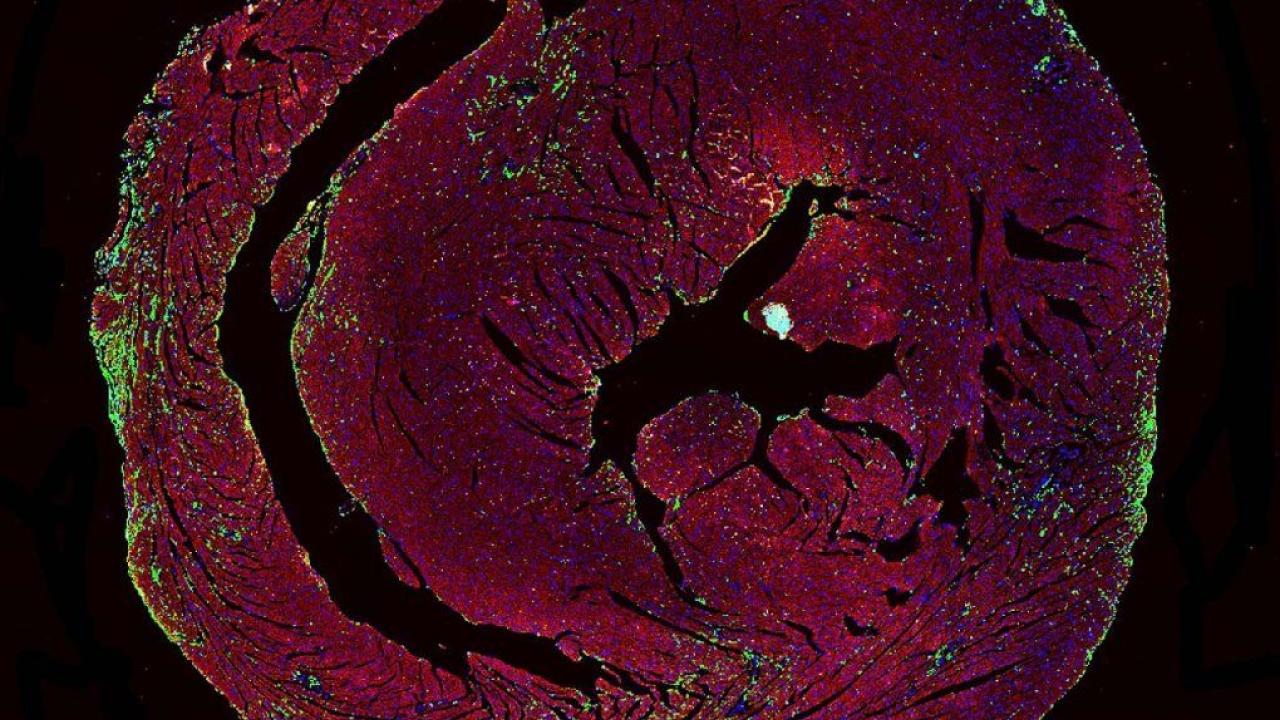 Microscopy of a mouse heart with immune infiltrates indicating ICI-myocarditis. Photo by UCSF

In the past several years, myocarditis has been of public interest because of cases associated with vaccines for SARS-CoV2 or related conditions. Another form of myocarditis has been linked to immune checkpoint inhibitors (ICIs) used in cancer care. ICI-induced myocarditis is a potentially fatal side effect of ICI usage, and it appears that the adverse cardiac effects may disproportionally impact female patients. This finding is in contrast to other forms of myocarditis, with more cases reported in male patients.

In a study co-led by researchers from UC San Francisco and The University of Texas MD Anderson Cancer Center, and appearing November 2 in Science Translational Medicine, the researchers shed new light on the underlying biology behind these sex differences.

The cardio-oncology group at UCSF has been investigating ICI-induced myocarditis and generated several mouse models of the new syndrome hoping to use these models for better strategies to help patients. One of these models was a genetic mouse model.

“This model copied much of the characteristics of the syndrome in humans and led to sudden death,” said Javid Moslehi, MD, William Grossman Distinguished Professor and section chief of Cardio-Oncology and Immunology for the UCSF Heart and Vascular Center. “What was strange, however, was that in this model, the female mice were affected.”

At the same time, the MD Anderson team, led by Liuqing Yang, PhD, and Chunru Lin, MD, PhD, both associate professors of Molecular and Cellular Oncology, had generated other models of ICI-myocarditis. The researchers bred tumor-bearing mice treated with ICI (combinatorial anti-PD-1 and anti-CTLA-4 antibody treatment) which exhibited several cardiovascular toxicities, including myocarditis and arrhythmia. In this model, female mice were also affected more compared to male mice.

“The sex differences observed in both ICI-myocarditis mouse models are especially intriguing because in non-ICI myocarditis (viral or autoimmune) in the general population, male sex is considered a risk factor and defines a more fulminant course,” said Moslehi. “If such an opposite sex-difference in ICI-myocarditis is true, it suggests a possible interaction of immune checkpoints and sex hormones.”

It turned out Moslehi was spot on. Initial studies by MD Anderson team identified two cardiac factors (termed MANF and HSPA5) that normally help protect the heart from immune invasion. These factors were diminished in the ICI-myocarditis models as well as human heart tissue from affected patients with ICI-myocarditis. The factors were further diminished in female mice and regulated by female sex hormones. Adding the factors back to mice attenuated disease, suggesting a causal role.