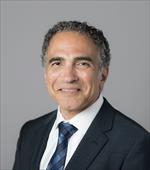 Dr. Arjomandi grew up in Ahvaz, a small city in Southwestern Iran, and moved to the United States in 1986 in the aftermath of Iranian revolution (1979), Iraq's invasion of Iran (1980-88), and his family displacement inside Iran (1980-83). When in California, he began his higher education at Los Angeles Pierce College before transferring to University of California San Diego in 1988, where he obtained a bachelor degree in molecular biology and completed a senior honors thesis in developmental biology in Dr. Richard Firtel’s lab. He then attended Stanford University School of Medicine in 1991, completing two predoctoral research fellowships in Dr. Etienne Emile Beaulieu’s lab at INSERM in Paris, France, and Dr. John Cooke’s vascular biology lab at Stanford. Dr. Arjomandi then completed a residency in internal medicine at UCLA (1996-99) and a fellowship in pulmonary and critical care at UCSF (2000-03). He completed three additional years of research fellowship funded by the American Lung Association and Chest Foundation before successfully competing for an NIH K23 award in 2006 and then joining the pulmonary and critical care faculty at UCSF and San Francisco General Hospital (SFGH). In 2008, he obtained a joint appointment at San Francisco VA Medical Center (SF VA).

Currently, Dr. Arjomandi is Professor of Medicine in the Divisions of Pulmonary, Critical Care, Allergy, and Sleep Medicine and Occupational and Environmental Medicine at UCSF with a joint appointment at SF VA. He is Director of the UCSF Human Exposure Laboratory at SFGH, Director of Environmental Medicine Clinic at SF VA, Site Director for the SF VA Airborne Hazard Exposure Study Center of Excellence, an investigator at the UCSF Center for Tobacco Control Research and Education, and a member of the UCSF Helen Diller Family Comprehensive Cancer Center.

The lung is constantly exposed to various environmental pollutants, allergens, and toxins, which interact with airways and alveoli and result in inflammation, injury, and disease. My laboratory primary research interest has been centered on the paradigm that respiratory exposures to pollutants and toxicants contribute to development and progression of chronic lung diseases, and may further yield systemic effects well beyond lungs. Under this paradigm, my research activities have focused on understanding the physiologic and immunologic mechanisms via which environmental exposures contribute to chronic lung diseases and how knowledge of these mechanisms could be translated to ways to better define, prognosticate, and manage disease burden at both individual and societal levels.

I have dedicated my efforts to (1) investigate the biology of airway immune cells using inhalational exposure to ozone in humans as a model of lung injury simulating exacerbation in chronic lung disease, and (2) characterize the early cardiopulmonary changes due to exposure to tobacco smoke and the pathophysiology and biology associated with those changes.