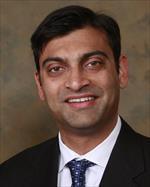 Dr. Bhattacharya is an attending ICU physician at UCSF Medical Center and directs a research laboratory at the Parnassus Heights campus. His lab focuses on lung injury and fibrosis, both major health problems for which effective therapies are limited, and is developing novel approaches to the study of cell-cell interactions in the lung--for example, between immune and structural cells. These interactions drive the development of scarring and progressive loss of lung function and therefore represent an opportunity for discovery of novel therapies.