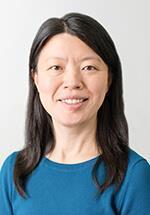 Zhen Jane Wang, MD received her undergraduate degree in Electrical Engineering from Brown University, and her medical degree from Northwestern University Medical School. She completed her residency training in Diagnostic Radiology at UCSF in 2007, serving as a Chief Resident from 2006-2007. Dr. Wang also completed a NIH T32 research training fellowship from 2006-2007, followed by a clinical fellowship in Abdominal Imaging at UCSF 2007-2008. She joined the UCSF faculty in 2008.

Dr Wang is currently the Associate Director for the T32 Clinician Scientist Training Program, and the Associate Chair for Strategic Planning in the Department of Radiology and Biomedical Imaging at the University of California, San Francisco.

Dr. Wang's research interests primarily focus on identification of novel imaging techniques and their development into practical and clinically useful diagnostic tools. Her research program includes hyperpolarized 13C MRI to assess renal tumor aggressiveness and diffuse renal disease (nephropathy), as well as quantitative imaging in pancreatic cancer. She has received numerous research awards, including the Distinguish Investigator Award in 2019 from the Academy for Radiology & Biomedical Imaging Research which honors radiologists and imaging scientists for outstanding accomplishments in imaging research.

Dr. Wang is regularly invited to lecture on various topics in Abdominal Imaging at multiple national radiology societies, including the Society of Abdominal Radiology, American Roentgen Ray Society, Radiological Society of North America. She has also been invited to lecture internationally including at the Asian-Oceanian Congress of Radiology, International Education Conference Program, and the Brazilian Congress of Radiology. Dr. Wang has served in a number of leadership roles in national radiology societies including as the Chair for the Radiological Society of North America Scientific Program Committee in 2020. She has also served as a grant reviewer for agencies including the NIH and European Research Council, and as a member of the External Advisory Board for the Department of Defense Kidney Cancer Research Program from 2018-2020.